The first two were made yesterday, on Sunday night, at Margarita’s. You can see her on both. Her line of descent is Nadezhda Kasatkina née Gripenberg – Vladimir Kasatkin – Edward Kasatkin – Margarita Kasatkina. For comparison, my line of descent is Nadezhda Kasatkina née Gripenberg – Irina Kasatkina (married to Sergey Gorbachov, but did not change her maiden surname) – Ingrid Bielska née Gorbachova – Julian Bielski. Margarita lives with her only daughter Olga and Olga’s husband Alexey. I sent you photos of Margarita and Olga some three years ago. That time Alexey was away from Moscow for a business trip. This time, i.e. last night, I did not manage to catch Olga, she was working till very late. You can see Alexey on the second photo instead. All of us send you a warmest hello and wave a flag of Finland. I bought the flag fifteen years ago in Helsingfors when I came to Finland for the first time and stayed at Bertel’s in Marsudden in May 2005.

We all pass you our most and most sincere condolences and join you in your bereavement after Elisabeth’s passing away.

Needless to say, I shall always remember Elisabeth, her kindness, heartiness and hospitality.

Back to the people on the photos – Margarita, Olga and Alexey are my closest relatives in Moscow. I see them much more often than I see my other Russian cousins who are Nadezhda’s other great-grandchildren. My observation is that modern Russian people tend to be considerably less social than people in the other European countries that I know. As for those other cousins, I see them once for two to four years at average. In case of Margarita’s family, it is once for a month or two.

Margarita works for a small ecology control company dealing with expert analyses and reviews. Olga works as a dance teacher now for a ballroom dance school and as a kind of dance animator for a nightclub. Alexey is a junior engineer in a mechanical engineering factory.

The third and the fourth photos are the views that I have from my windows at home, the directions are North-West and South-West. I live on the eleventh floor in a block of flats. I was longing to see these views while I was in North-West Siberia.

As for my seven-and-a-half months in Siberia, I flew from Moscow to and then came back to Moscow from a town called Novy Urengoy. You should be able to find it on a map. Here are links about the town:

From Novy Urengoy, one has to travel over two hundred kilometres directly east. As English people say, in the middle of nowhere or, to be more precise, in the forest-tundra zone which spans for thousands and thousands and thousands kilometres, there is one of a great many Russian natural gas production fields. That is where I worked from early March till mid-October this year. The name of the field is South-Rusanovskoye, but I do not think you may find it anywhere in broadly available sources. Instead, you may see on the map a big river called the Pur, it flows north to the Arctic Ocean. When going from Novy Urengoy to the South-Rusanovskoye field, you have to cross it. The river is about eight hundred metres wide at the point of crossing and there is a pontoon bridge. Huge tracks carrying various equipment for gas-producing fields use the bridge and the whole floating structure eight-hundred-meter long discernibly shakes and rocks on the water under their weight. As you can imagine, it is quite an experience.

As soon as you are on the other, i.e. the eastern side of the river, there is no asphalted road any more and the road becomes very primitive and very bumpy; a cross-country jeep can do between twenty to forty kilometres maximum there, so the drive is, I should say, a hard experience. Fortunately, I had to do that tip only twice – there and back. Contrary to that, the living and working conditions at the gas production field were very good: comfortable single rooms with shower units and toilets in each room, good food and quite nice people. Virtually no connection with the outer world except for emergency, though.

Now I am back to Moscow and after some rest I will start looking for a new job. You might remember, at the end of 2019 I was made redundant in the Norwegian company where I had been working for nearly four years.

I look forward to the next summer. I do hope that next summer the world situation in terms of the medical conditions will come back to normal at long last and then I will come and visit you. I have not been to Finland since June 2014.

Kindest regards and best wishes to you as ever,

And, please, pass my very best regards to Jaana 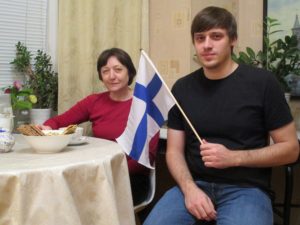